Get ready to Lift-Off!

Our gift to female entrepreneurs everywhere

So, you’re all set to take your first steps to seamless and joyful business growth? Great choice! By signing up to our Lift-Off programme you’re joining many others who have found the freedom to evolve and break exciting new ground with their business. 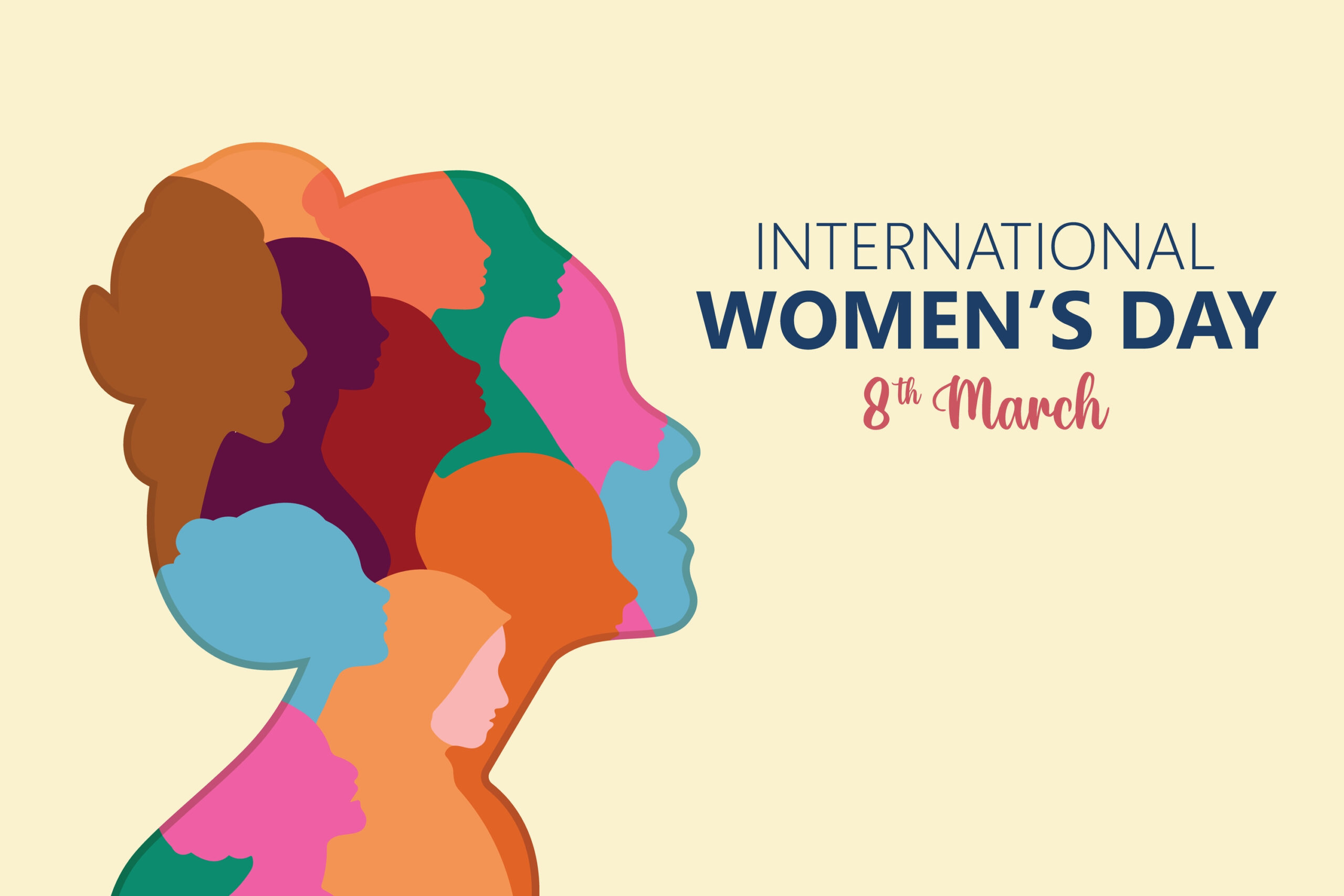 Business used to be a man’s world – but are we experiencing a new, more feminine, normal? For International Women’s Day, Wyseminds’ Henk Jansen explores the history of how business has changed.

There used to be just one way of working, which had many characteristics that we associate with masculinity. Today though we have a whole pallet of different ways of leading our businesses; and it coincides with a more feminine approach gaining ground.

But how did this change happen? To understand that we can look at three things; how organising business has developed over time, how leadership is becoming more authentic and emotional, and the cultural shift to a more open, configurative, and feminine way of ‘making it happen’.

Organising your business is a concept that has only existed for 120 years. Until the early 1900s people just worked hard and long days. Craftsmanship was the leading term for people trying to survive and, while the steam-engine was invented long before, when it began to be mass-produced around 1900 we had to think more about how we organise labour. Engineers were leading in developing ways of working to enhance efficiency. It was all about hierarchy, clarity, and fixed processes. 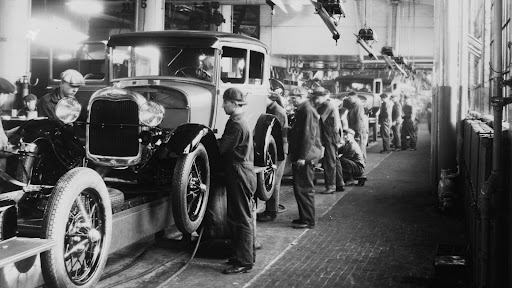 The biggest message in the factory was ‘this is how to do it’. One of the prominent examples was Henry Ford and his regimented production line, where there was only one way of doing things right. This engineer-led technical approach dominated for the best part of 50 years, before psychologists started exploring why we have to work in certain ways. Interdisciplinary teams were formed to explore ‘the problem’, and over time we added economic and commercial viewpoints; developing business models that were designed to grow and make more money.

Postmodernism led to a more human-oriented way of thinking, resulting in meaning becoming more and more important. It merges the rational, scientific and economic approaches to organisational models, and can be found in the commercial thinking of consultancy firms who answered that need by developing management-concepts like LEAN and BPR. In essence, it led to the development of the knowledge economy, and as far as organising businesses goes it confirmed that there was no one way to do it.

So if there is no ‘one way’ to organise your business, why bother to develop and apply the concept of organisational modelling at all? The challenge is to understand and apply models that are most helpful for your unique organisation and situation. Now more diverse ideas for organising businesses are being accepted, there are more options for women to adapt current models or develop new ones that work best for them – for others though the question was less about structure, and more about culture.

As our ideas for how we organise our businesses have evolved, we have made space for more emotional approaches alongside the more rational ones, including an emphasis on individual fulfilment and meaning.

One of the latest developments in organisational thinking is proposed by Frederic Laloux who highlights that self-direction, autonomy, and humanity with meaning and purpose are becoming more and more important in organising concepts. There is still a tendency to lean on rational ways of working, but we can see a clear change in focus – if meaning and purpose are becoming more important in the way we think about organising our business, it doesn’t just influence what we do, but how we do it; our culture.

Culture can be defined as a shared cognitive system – including goals, norms, beliefs, and values – that gives direction to people’s actions within a social group. An established culture drives behaviour, and creates a strong expression of meaning at both an individual and organisational level.

Like with organisational models though, the concept of organisational culture has not been around for long. Before it was meaningfully explored, business cultures and structures historically reinforced the idea that there was one way to do things, and it was your job to fit in. But now, as Laloux proposes; culture supports the growing importance of meaning in organising. As a business’s purpose takes centre stage, culture can be seen as a preservative and stabilising force in organisations made up of diverse people and interested – but culture needs the right leadership to support this.

The earliest concepts of leadership were about the “genetic factor”– that leadership skills were innate, something you were born with. Then came evolutionary leadership theory, which combined the genetic way of thinking with how you interact with the environment; that to lead and follow were instinctive behavioural strategies to hunt, migrate, and survive in an environment you didn’t control. Over time this adapted into thinking about leadership as a collection of traits or characteristics; a flexible instrument to use according to the situation, and therefore something that could maybe be taught or learned.

Our understanding of leadership has grown, from being a product of genes, to evolution, to characteristics and behavioural style adaptive to situations. This development also has found its way to a new concept; charismatic and transformational ways of leading that emphasise meaning, motivation and interaction. The new term used is ‘management of meaning’. This leadership style is entirely different compared to how business leaders behaved historically; instead of giving direction to others it’s more about letting others find their direction – allowing emotional interaction to sit alongside rational and technical considerations. 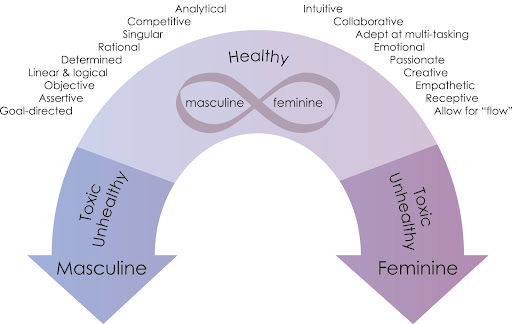 Looking back we can carefully conclude that the rational approach in organising, culture and leadership has moved to an era of human orientation where autonomy, meaning, purpose, motivation and interaction are becoming more and more important. A shift from power influence to a more collective informal culture.

Assigning gender-roles to these trends isn’t exactly clear cut, but most people recognise that as the business world has adjusted to include more than one way to run a business, this has opened up the space for more feminine approaches as alternatives to the historical, patriarchal, norm.

Since meaning, purpose, motivation and interaction are more people- and environment-oriented, and empathy is generally considered as more feminine, my humble conclusion is that this is the direction of entrepreneurship. This change gives us more freedom; instead of conforming with preconceived ideas that there is just one way to do things, we can pick the desired behaviour that will work best for the purpose we want to fulfil. Whether it’s a trait, a genetic component or behaviour to be learned, these factors make no difference in the fact that the more feminine approach is present in our business world, and maybe the key for successful entrepreneurship in the future.

In the lead up to International Women’s Day, our Wyseminds founder, Julie Perkins, spoke to Tessa Parry-Wingfield about the gender lens from her point of view. It’s a probing and hyper-relevant read, reminding us all that we have a part to play to create the ripple effect that is needed for change to happen – click here for the interview.

Lightbulb moment: “My business was purpose-less…”

Tessa Parry-Wingfield is the founder of The Power of Words writer collective – who encountered not one, but three lightbulb moments during the free entry level of the Wyseminds’ training programme. We're excited to share them with you.

Lightbulb moment: Self-belief can be your superpower

There comes a time in most of our lives when seeds of self-doubt can take root, but in business that can seriously impact your passion for growth and development. In those times, as Finnish entrepreneur Loviisa Maasson discovered, you need a ‘lightbulb moment’ to highlight your strengths and banish your weaknesses.

Holding out for a hero

Julie Perkins explains how starting a business can be like going on an amazing adventure and to survive the twists and turns in the road and changing external forces, the answer lies closer to home than you might think.

Growing your business can be like riding a series of waves, some mere ripples and others so titanic they threaten to send you down to Davy Jones’ Locker. However, if you build resilience you can weather any storm and thrive in the New Norm of the post-pandemic waters.